Last week, I learned about the intense excitement that brews in a 1st grader’s belly during the moments of anticipation as the pressure builds enough to launch a rocket. All within one activity, we practiced the scientific method, “built” a rocket (out of a film canister), learned about pressure and chemical reactions, and practiced measuring as a team.

The ingenious 1st grade scientists first observed the way two different fuels (Alka-Seltzer/water and baking soda/vinegar) react to create gases. From their observations, they made a hypothesis about which fuel would send the rocket flying further from the launch pad. The next class, we eagerly headed to the sports field for the launch. Everyone worked harmoniously to prepare the launch pad, get the fuels ready, and standby for launch. 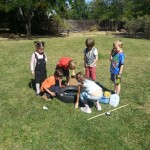 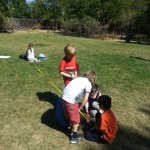 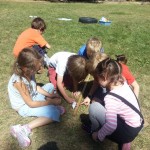 Turns out, the baking soda/vinegar reaction is so fast and volatile that I could not even get more than a foot away before the rockets went flying! There were many shrills of joy and wonder as our rockets blasted into the sky and the group got to use meter sticks, measuring tapes, and their feet, to measure the “most explosive fuel.” There was a clear winner for the stronger fuel. Ask a first grader or do the experiment at home to find out which fuel is the more powerful one!

Many Blessings and Deep Joy,