It was August of 2010 when I got my first classroom. I had just finished my Master’s program in Educational Psychology and had my Colorado Teacher’s License in hand.  I was up to date on all the latest research about classroom management, age-appropriate curriculum, scaffolding, and differentiation. Every sentence out of my mouth had some buzzword of the moment. Sure, I was nervous and a little intimidated, but the feeling I had most often was that I was as prepared as a first-year teacher.

We had two weeks of planning before the students arrived.  In my teacher-training program, math followed a curriculum that had a script.  I knew that Bixby didn’t follow a textbook curriculum like this, so I would have to spend my planning weeks creating my script based on likely responses I might get from the students.  I was determined to make math “the fun class” for these first graders.  Near the end of my first week of planning, I was feeling pretty pleased with my lesson plans and myself.  Right about that time is when I heard humming coming down the stairs.  Supported by two walking sticks and weighed down by a briefcase, Bart (Bixby School’s Co-Founder) entered my classroom.

I had heard a little about this old man before. People spoke his name as if he was a legend at Bixby, but I didn’t know what to expect. He wasted no time. He spent a lifetime as an educator, and young teachers straight out of college were nothing new to him.   He asked me what I planned to do with the students on the first day of school.  I straightened myself up and reached for my plan book, proud to share my adorable, exciting lessons.  Before I could speak, with a twinkle in his eye, Bart asked me, “You don’t know these children yet, do you? I think you need to get to know them a little before you decide what they are capable of doing.”

Bart handed me a hundred dollars. He told me to go to the bank and get coins, mostly pennies, but nickels, dimes, and quarters would be okay too. Maybe even a few dollar bills if I felt like it. Bart explained toy classroom money just wouldn’t work. Students needed real money to buy into what we were doing.

When I met my students, I followed Bart’s advice and dumped a few thousand pennies on the floor. The students giggled, their eyes lit up, and they struggled to keep their hands away.  I told them we wouldn’t have many rules to start; we’d add some along the way if needed, but for now, show me what you can do. And they jumped in. Two children immediately started stacking them. Another knew from his time as a camper over the summer that he could find a magnifying glass in the room and took that out to examine the pennies closely. Someone placed the pennies flat on the floor and made a design. One child anticipated what he should be doing in math class and began counting them. He proudly reported to me that he had collected 37 pennies. Another child made a big pile of pennies and rolled around in them, shouting, “I’M RICH!! I’M RICH!!” It was loud and chaotic, but it felt good.  The students were engaged, and we were all having fun.

In the days that followed, I watched the students and asked many questions.  I learned that all of them knew how to count, at least through fifty, if not further. I learned that there was awareness of a penny’s worth compared to other coins. I learned that some were comfortable writing numbers, and others preferred not to hold a writing utensil at all. And this shaped the beginning curriculum for the year.

As a first-year teacher, I had a perfect storm situation.  My students were eager mathematicians.  Beginning the first day of school, they were already proclaiming their love of 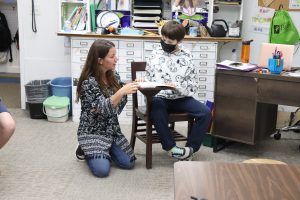 math to me.  I was so psyched about their energy and passion, and we all came to class ready to explore.  They also loved to talk. Every class would begin with a brainteaser, followed by a discussion.  Some days the discussion would last so long that no other planned curriculum would happen.  We would go off on tangents in these discussions, exploring geometry, algebra, factoring, logic, prime numbers, and mathematical theories.

These conversation-based math classes work well with younger students, but how about the older grades?  How can Bixby math develop a curriculum based on the student’s interests when they also need to ensure that “the concepts of multiplication and division can be applied to multiply and divide fractions.”? What’s the purpose of an algorithm? In any math classroom at Bixby, you will find students working with manipulatives.  You will see students solving problems with a hands-on technique. They may solve their problems slower than their peer working with a traditional algorithm, but there is a reason for this choice.

In fourth grade, the students begin working with negative numbers. This is often introduced with thermometers. A sample question could be “The temperature is 10 degrees above 0. What is the final temperature if the temperature goes down 25 degrees, what is the final temperature?” The students have access to giant wooden thermometers with holes drilled evenly along every degree. Small pegs can be placed in the holes to keep track of the temperature movement. In the beginning, every student uses the boards to see the change as the temperature lowers. They hold it in their hands and feel the movement to a lower space on the board. Some students quickly discover shortcuts. Some may be able to solve 10-25= -15 mentally. They are able to create the algorithm and use it on other problems as the numbers become more challenging. Other students may use the thermometer board throughout the entire unit.  My question becomes, “when do we give the algorithm to students who are not discovering it on their own?” Some children succeed in math, getting perfect scores on their 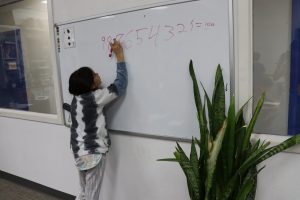 papers because they have memorized math facts and know how to use algorithms. Is it useless if they do not truly understand the why behind it? Is it possible that some children need the math facts and algorithms first, and only then will they be able to create the whys, later on, potentially years down the road?

Questions like these are part of the complexity of Bixby Math. We make assumptions, make predictions, and ask loaded questions, but most importantly, we listen and watch. Bixby math only works if we are present, honestly observing the discoveries and challenges of the students.

Around age seven and lasting until around eleven, children are in the concrete operational stage of development. They can think logically about the concrete concepts in their world. This means they can take the hands-on manipulatives they are using in math class and work it through in their head as well.

A typical Bart problem is designed not only to learn and practice a new skill but also to get you just off balance enough to ensure you are engaged. I remember in my graduate school courses (although I don’t have any references to quote here) that true learning only happens when your brain is in a state of disequilibrium.  I like to think of Bart’s math problems as intentionally helping your brain reach a state of disequilibrium, so you are more open and present to learning new information.

Elementary school mathematics is a crucial building block for the more complex math in middle school, high school, and beyond, but isolation can be dull.  Bart’s problems are designed so creatively that you never have a moment to be bored. Even if the concept itself is simple, you must simultaneously hold onto so many different pieces of the puzzle that it makes the work captivating and engaging.