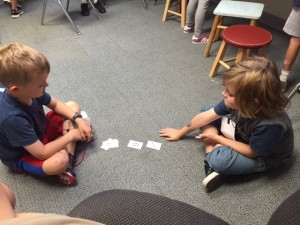 We have had a wonderful semester of learning, hard work, and fun! As our beloved Bixby community looks forward to a seventeen day break from school, I thought that it might be helpful to share some math games that are fun to play at home or while traveling during this winter break. 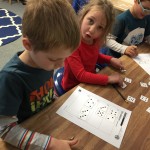 At the beginning of the year, I asked students to identify hopes and dreams for math this year. Not surprisingly, a large percentage of students said that they hoped to play math games because they are fun. I also hope to make math fun, but math games help achieve many other goals too. Math games can motivate kids to practice skills over and over again; they also provide a social context in which students need to explain their thinking and support their answers. Games give kids a chance to think of creatively, flexibly, and strategically, and games give a purpose and meaning to the mathematical concepts that they are learning. Of course, math games provide many life lessons that go beyond the math as well. 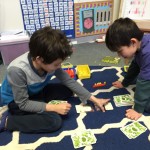 Most of the games that we play in class are fairly simple and use materials that you are likely to have around the house. Your child can probably teach you how to play some of the games that I will mention, but I will also include an appendix with basic rules. In first grade, we have just finished a unit on place value. During this unit, students used their understanding of place value and probability to make the greatest number possible in ‘The Place Value Game.’ We recently began a unit on data analysis, and to support the skill of sorting information and identifying attributes, we have been playing a game called ‘Guess My Rule.’ Second graders have practiced adding number strings in ‘Make 20.’ In second and third grade combined classes, we have been working on plotting coordinate pairs and have practiced the skill by playing ‘Coordinate Pair Tic-Tac-Toe.’ A week or two after we return to school, all classes will work on fraction concepts, and we will use many games to practice skills in this area too.

Although many of the classroom games are targeted on a specific skill, any games that involve combining dice or card values can be a fun way to increase number sense. We sometimes have a game day in which we play commercial games like Farkle, Yahtzee, or Blink. We also use some Kitten War cards to play our own game called, ‘May the Cutest Kitty Win.’ A great source for ideas is Math Games by Peggy Kaye. Of course, there are many computer games that can make practicing number combinations fun. Some good sites are www.arcademics.com, www.coolmath–games.com, www.mathplayground.com, and www.multiplication.com. 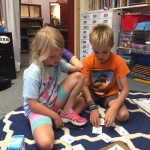 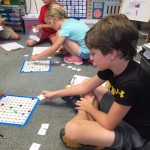 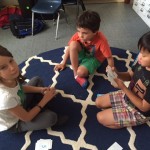 I hope that you have a wonderful break and that you enjoy playing these games together as a family. I look forward to seeing you back at Bixby in the New Year!

Guess My Rule: In this game, you need a set of objects like buttons, shells, or blocks and two pieces of paper (one that says, “Fits the rule,” and another that says, “Doesn’t fit the rule.”). One player secretly writes down an attribute that many of the objects might have in common, such as a smooth. The player then chooses an object that fits the rule and puts it on a piece of paper that says, “Fits the rule.” The other player then chooses an item that they guess fits the rule. The first player agrees or lets them know that it does not fit the rule and places it on the ‘Doesn’t fit the rule’ paper. The second player continues to guess until he or she is correct approximately four times. Then, the second player can then guess the rule and the first player lets him or her know if the guess is correct.

Place Value Game: In this game, you need a piece of paper and a die or number cards.   Each player draws four squares next to each other and a fifth square slightly separated with the word “reject” written under it. Players then take turns rolling the dice or turning a card for all players. Each player decides which position to place the number rolled/drawn. Once a number is written in a position it cannot be changed. After five rolls, a number should be written in each box to make a four-digit number and a rejected number. The player with the greatest number wins.

Make 20: Use a deck of cards with Ace as 1 and face cards removed. Give each player a piece of paper and deal each player 5 cards face up. During his or her turn, the player chooses three cards to make a total that is as close to 20 as possible. He or she then writes the numbers, the total, and the distance from 20, which is the number of points for that turn. The player then gets three new cards. Play alternates for five rounds. Whoever has the lowest points wins.

Coordinate Pair Tic-Tac-Toe: Use graph paper to make a one quadrant coordinate plane with 0 through 5 on the x and y-axis. Then make a T-Chart headed with X and O. Each player alternates writing a coordinate under his or her symbol on the T-chart and then placing an X or 0 on the point listed. The player wins when he or she has four Xs or 0s in a row horizontally, vertically, or diagonally.