One job that all the preschool teachers share is decorating and organizing the different rooms of the classroom to correspond with the seasons and student interests.  In the past, we have created winter wonderlands in the lounge with hanging snow flakes and paintings adorned with sparkles.  The discovery room has been turned into an exotic jungle with hanging vines, towering trees, and wild creatures.  And it’s not uncommon to find the dress-up room transformed into a public library, or a restaurant, or space station and everything in between.  I think the most exciting aspect of this process for me is how it is directed and driven by the students.

This month, the students and I decided to transform the dress-up room into an “Emergency Center”.  I noticed that the students had been engaging in a lot of helping and rescuing games and the children agreed that this was something they wanted to explore.  As we began to open materials we had to address a few questions.  One of the students exclaimed that the room was in fact a fire station and only fire fighters could play.  This opened up a rich conversation about all of the important things that firemen can do, but then also about some of their limitations as well.  One of the other students chimed in, “What if the people get burned? Like super hurt?”  After some thought and discussion, the play was expanded to include a doctor’s office next to the fire station.  It wasn’t long before two of the fire trucks were involved in a “ginormous pile-up” so, naturally, some mechanics and a garage area were added to the play. 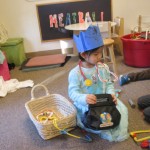 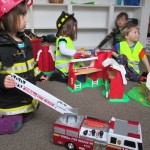 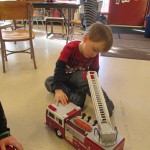 A couple days later, after spending some time playing with the medical equipment and driving the fire trucks around with wailing sirens, several of the students realized that they needed a way to communicate with one another.  We discussed the different ways that rescuers do this in the real world and then decided to construct a 911-dispatch center out of cardboard in the coming weeks.

Sometimes as a teacher, there is a temptation to over plan, to walk into the classroom with a set agenda and lesson in mind.  But there’s no way I could have planned as rich of an activity as the kids were able to create as they guided each other towards new and exciting ideas.  This kind of model allows me to clearly see where each of the children are in terms of their interests and abilities while simultaneously giving me a wealth of ideas of where to guide the activity next.  One of the things I’ve learned working at Bixby is that taking the time to illicit ideas from children can be a tremendously powerful tool in creating rich and meaningful experiences for them.