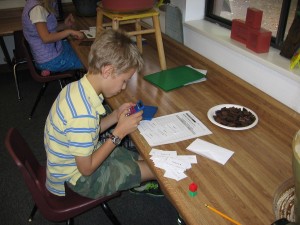 This past week 4th and 5th graders have been hard at work discovering various properties of numbers. We began by working with factors and multiples. Students practiced finding factors by breaking numbers into their multiplication combinations: 24 = 1×24, 2×12, 3×8, and 4×6. We found the multiples of numbers by skip counting when it was possible, or using a calculator (some calculators can find multiples by pressing the number you’re wanting the multiples of, +, and then =. This is a fun and less cumbersome method of working with multiples). 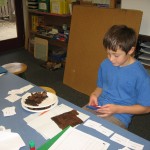 After this work with factors and multiples, we learned about prime and composite numbers, odd and even numbers and square numbers. Most 4th and 5th graders understand odd/even numbers. For many, finding square, composite and prime numbers was new. We used square, wooden tiles to “build” each number. This method allowed students to manipulate the shape/dimensions of their squares and rectangles and allowed them to discover which numbers 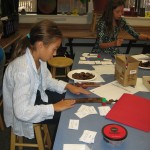 made a square (4 = 2×2, 9 = 3×3), which numbers had only one rectangle (5 = 1×5/5×1, 7 = 1×7/7×1), and which numbers had more than one rectangle (6 = 1×6 and 2×3, 9 = 1×9 and 3×3). They actually constructed square numbers, prime numbers and composite numbers. For those that needed some review on odd/even numbers, an even number is one that can make pairs of tiles with no leftovers. Giving students the opportunity to construct numbers in this way, allows them to understand number properties in a deeper and more meaningful way. In the words of one 4th grader, having the tiles allowed me to, “see it, move it and feel it.”

They then used the knowledge they gained about number properties to solve number puzzles: This number is a multiple of 15. This number is odd. This number is greater than 50. This number is less than 100. Each puzzle had 4 clues and gave students the chance to apply what they had learned. Students were given a variety of tools: graph paper, calculators, wooden tiles and a chart of the numbers 1-300.

An important part of algebraic thinking is to be able to represent or make models that illustrate the structure of a class of numbers. In the number puzzle activity, as students use tiles to represent prime and square numbers, they are also building mental models associated with each type of number. When students are asked to make or justify generalizations about prime/square/composite numbers, they will call on these models.

Students have been deeply engaged in these activities and I am excited to work with these curious and motivated mathematicians.