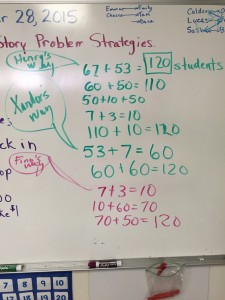 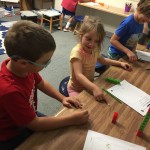 Dana’s First Grade Math Class:
Flexible, intuitive thinking with numbers is one of the main math goals for Bixby students. Finding many ways to make a particular number is an important way to help develop this number sense. Students began this type of work last week by solving problems and playing games that involved finding many combinations that make a certain number. For example, students solved a problem in which they were challenged to find as many ways as they could to have a total of 9 peas and carrots. This type of work helps develop many number skills including: flexibility with numbers, understanding of part-part-whole relationships that result in automaticity with addition and subtraction, persistence in finding multiple answers to a problem, and organized thinking as students will eventually learn to find all combinations by making an organized list. 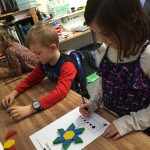 Later this week, students began a geometry unit. Their study included describing the characteristics of triangles, circles, rectangles, rhombuses, and hexagons. As a part of their math workshop, they filled shapes and made pictures with pattern blocks; then students recorded the number of each type of pattern block used and added multiple numbers to find the total number of pieces. We discussed ways to group numbers to make them easier to add.

Next week students will identify common attributes of shapes and will sort them into groups such as quadrilaterals and triangles. They will also represent and draw different polygons using geoboards and dot paper. 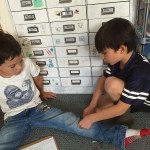 Dana’s Second and Third Grade Math Class:
Measurement is a skill that is applied in many subjects and throughout life. After working on strategies used to add and subtract multi-digit numbers and solving problems that involved applying place value concepts, second and third graders began a unit on measurement and geometry by exploring what it means to measure length. We focused on the idea that measurement involves a comparison of an attribute of an item with a unit that has the same attribute. In order to hone in on this understanding, 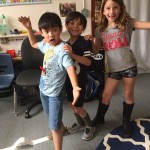 we began our study by using non-standard units. We first measured the room with our feet and compared how many of one student’s feet were needed to measure the room compared with another student. This led us to make a standard ‘class foot’ by placing our feet on adding machine tape and then dividing the paper evenly between all the people in the class. Next, students used the ‘class foot’ to measure items in the room. 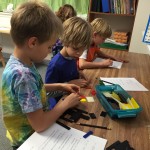 This week students continued using non-standard units such as paper clips and Cuisenaire rods to measure items in the room. Next, each student made a ruler and compared it to a manufactured ruler. Students also completed a problem of the day each day and this week, which involved calculating elapsed time.

Next week, students will continue to use measuring skills to find perimeter using standard units. They will also describe attributes of two-dimensional shapes.