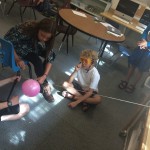 4th and 5th Grades:
What keeps a bird, or a plane, in the air? 4th and 5th graders are finding out, as they explore the forces and motion of flight. They’ve demonstrated or experimented with flight’s four “mystery forces,” in some 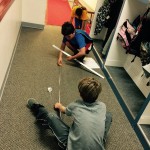 cases figuring out the “mystery” before the force was revealed. They seemed to especially enjoy making balloon rockets that showed thrust in action. Now, students are testing how changing a paper-and-straw plane’s center of gravity affects its trajectory. Shortly, they’ll move onto Newton’s Laws of Motion and brainstorm connections to real-world examples. Students will also be introduced to songs featuring Newton’s Laws. Hopefully, you’ll hear some humming at home! 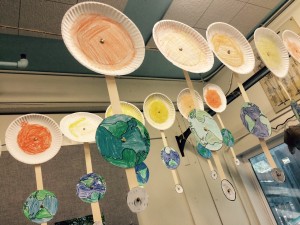 2nd and 3rd Grades:
2nd and 3rd graders took advantage of the change of seasons to make observations of fall at Bridgewalk Pond. They collected leaves from the Bixby grounds and, using chromatography, searched for pigments hidden inside. Using a classroom model and their own play dough versions, students practiced revolving the tilted Earth around the sun. In this way, they saw where seasons come from and how the Northern and Southern Hemispheres experience opposite seasons. Students made paper plate models of the Earth, sun, and moon, which distinguish between revolution and rotation. Next week, they’ll use lunar calendars to examine the patterns in the moon’s phases and see, from a classroom model, why the moon looks they way it does to us.