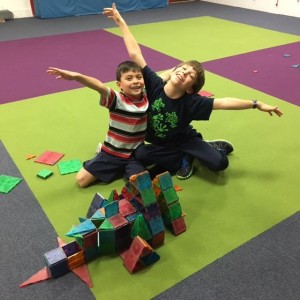 Free time is yet another unique aspect of Bixby’s curriculum. As educators and parents, we have long heard about the value of play and of making choices, but these qualities are often the first things jettisoned from a program in the race for “success,” even in preschool and kindergarten! Our founders, Pat and Bart trusted the importance of this type of personal choice enough to build it into every aspect of the school’s structure, from preschoolers choosing between several different “open” areas on up through fifth graders having free time built right into their daily schedule.

Those blank rectangles signifying free time have been scattered around each student’s schedule for the last 40 years or so; they have always been (and still are) highly prized. New students often start the year by asking, “What can I do during my free time?” The answer encompasses a wide range of options: construction at the building table (Legos, K’Nex, Kapla Blocks…), quiet reading, art work at the “island” table, shelf toys in the gym, and outdoor play in Lower Yard (once you’ve earned your privileges that is)!

What actually happens during this time is often dynamic—whether it is a student working alone, going deeply into their ideas (e.g., “I’m drawing my own set of Pokemon cards.”) or, more often than not, a group of students interacting with each other. 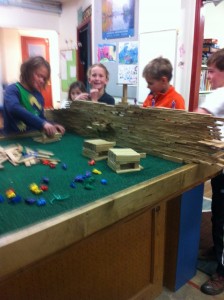 For instance, just last month when the Kapla Blocks were out at the building table, four 2nd and 3rd graders began fiddling around with them as they chatted. Bit by bit, a wall began to emerge and as so often happens, the idea caught on, “Let’s use all the blocks at the table!” From there a single wall was built…and then collapsed, and then was built again, but this time, “We need to make them go like this.” This more thorough overlapping strategy led to a stronger wall and a cantilevered section hanging off the table as much as 10 extra inches. As the wall grew higher and longer, the enthusiasm rose as well, “It’s the Great Wall of China!” “What’s that?” asked one of the builders. Explanations came from several directions and were intriguing enough that the student decided to pursue his curiosity further through conversation with his parents and an internet search at home that evening.

This is one of many versions of free time and free choice at its best—collaboration, flexible thinking, resiliency, and students inspiring other students!

Now, wherever there is choice there is the potential for things to get messy, which is another crucial part of the learning process—stay tuned next month for more free time escapades!