Inside Spanish With María 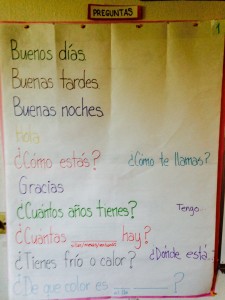 The First Graders are very excited to be able to say things in another language, especially if their parents don’t understand them, or to teach their younger siblings, ¡Buenos días!. First graders already know two songs, Buenos días and 1,2,3 amigos. They are also in the process of learning body parts with Cabeza, cara, piernas, pies. They are also excited because they taught me a song they learned in kindergarten, ¡Hola, amigos!

They also know their colors. Go ahead, test them! Ask your child, ¿Qué color es este?, and point to a color. I am sure they will know the answer. ☺ 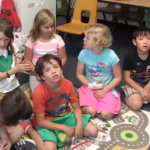 The Second Graders are starting to learn to read in Spanish. We are reviewing the vocabulary they learned last year because these words are their stepping-stones to reading in Spanish. They are also introduced to Spanish grammar. This week we started with articles. As you may know, in Spanish there are four artículos definidos: el, la, los, and las, which are equivalent to “the” in English. They are learning when to use one or the other. 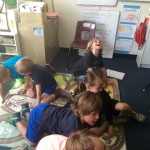 Pretending to be animals.

There are many advantages to learning a second language in the early stages of childhood. Children are more receptive to the language and can easily acquire the new sounds and rhythms. To maximize this effect, the classes focus on the sounds of the Spanish language through songs, games, poems and read-aloud books. We also play many games in order to strengthen their learning and motivate them to use the language.

For those of you who have not met me, I am originally from Mexico and Spanish is my mother tongue. I have a daughter who was born in Texas and a Polish husband. I love teaching, especially Spanish, although my studies were in Science. I enjoy teaching children because of their spontaneity and because it is simply fun! Hasta la próxima!