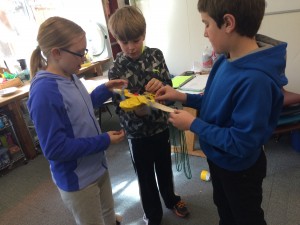 In recent weeks, my students reminded me about a teaching goal I’d placed too far on the back burner. They didn’t realize it, of course, but they couldn’t have been clearer if they wrote it in neon Expo marker on the white board.

The first reminder came from a science fair team that was testing propeller shapes in flight. From the start, the team’s enthusiasm was contagious. Students from other groups dropped by to give their opinions on the finer points. Should the team change the length of the blades or the curve? Should the propellers spin in the same or opposite directions? Decisions were made, materials gathered, and construction was quickly underway.

Then the challenges set in. Designing the propellers required learning a 3-D printing software. The balsa wood split and broke apart easily. Motors flopped and jiggled on the wings. Circuit connections, buried under layers of duct tape, came undone. The propellers spun off, or wouldn’t spin at all. As the team solved one problem, another appeared. Meanwhile, the science fair got closer.

Another team chose to test how wheel size affects car speed. The partners spent class after class hunched over a car that wouldn’t run. Too much weight made it sag; too little left the car under-powered. Every time a circuit disconnected, the boys spent chunks of time tracing their wiring to the source of the problem.

These students weren’t alone. In 2nd, 3rd, 4th, and 5th grades, there were children wrestling with challenge.

What I saw in these students, and, frankly, marveled at, was true perseverance—or grit. These boys and girls committed to long-term goals and showed stamina in achieving them. They made sacrifices—like free time—to complete projects they saw as important. Grit is a socio-emotional objective I’d meant to incorporate very explicitly in my teaching, and haven’t talked about enough. 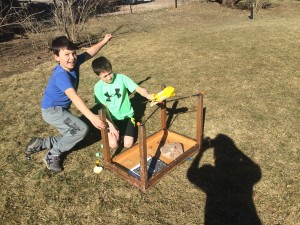 Grit is a strong predictor of the outcomes we seek for our students: higher GPA’s and graduation rates, success in college and in careers. While the components of grit are many and diffuse, there are ways teachers can foster it. How? Well, that’s the tricky part. The world of education research has barely begun to parse what works from what doesn’t, but thanks to the research of “grit” psychologist Angela Lee Duckworth and Stanford University’s Carol Dweck, we have some great starting points.

Carol Dweck has highlighted the importance of helping students cultivate the “growth mindset.” Rather than a steadfast “I’m bad at math,” a growth mindset insists “I’ll get better at multiplication as I practice.” A person with a growth mindset believes his or her ability to learn can change with effort.

In science class, students hear that struggling with challenge creates physical changes in the brain. We celebrate effort and progress over innate intelligence or talent. We reframe “problems” as learning opportunities. These strategies are used throughout the school; Bixby is all about helping children cultivate a growth mindset.

Now, as Angela Duckworth describes, we can link a growth mindset to grit, and all those desirable outcomes. Students and I can discuss stamina and perseverance—more explicitly. We can talk about where we see grit or hear about it. And after this week’s science fairs are over, and the propellers have spun (which they do now), and the car drives forward (which it does now), we’ll celebrate not the success of these projects, but the sheer effort and perseverance that went into them.