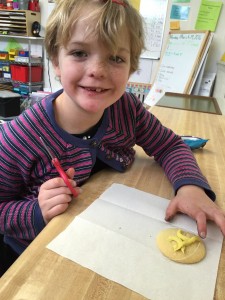 March 14th was Π Day; it was a special one too; 3.1416 is Π rounded to the ten thousandths place! This is certainly something to celebrate. Yet, what do first, second, and third graders really know about Π? Some said that they had heard about it through older brothers and sisters but admitted that they were not really sure what it is. It may take years of experience to really understand the concept, but on Pi Day, Bixby students took part in some activities to help them start on the journey. 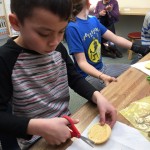 Each student began celebrating and investigating pi with a round sugar cookie. Students measured the circumference of the cookie with some string and then cut the string into as many lengths equal to the diameter as possible also figuring out a fractional equivalent of the part that was left over. We converted the mixed numbers to decimals and averaged the data to see how close we got to pi. Although we were not exact, our data averaged to 3.138, which rounds to 3.14!

Next, we read the story, Sir Cumference and the Dragon of Pi by Cindy Neuschwander. In the story, a boy solves a riddle to cure his father who drank a potion that turned him into a dragon. The answer to the riddle is the magic number that is the same for all circles: pi. The literature experience helped reinforce the discovery the students had made because the boy in the book experimented to figure out how many diameters are equivalent to the circumference of a circle to find pi just as the Bixby students had. 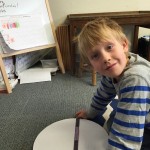 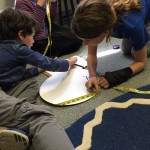 As these young mathematicians use procedures to find out about round objects in the future, my hope is that their application of the formulas will be based on real understanding because they discovered the relationship through their own experiences and developed the formula for themselves. As Alfie Kohn, proponent of progressive educations says, “What distinguishes progressive education is that students must construct their own understanding of ideas,” and construct ideas is what Bixby students did on Pi Day.

“Knowing how something is put together is worth a thousand facts about it,” Jerome Bruner