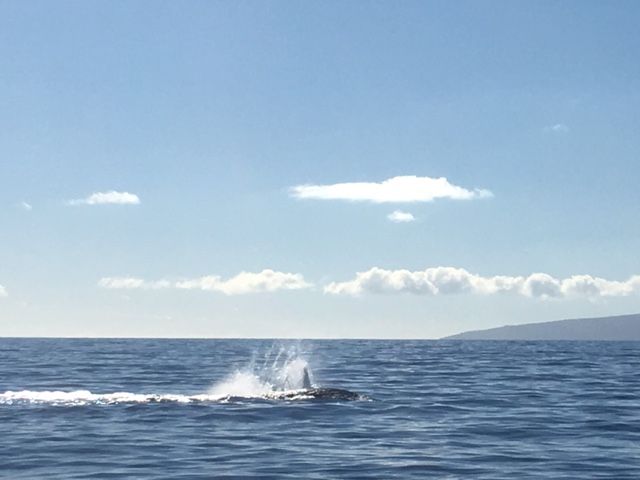 On December 25th 2017, a small whale watching boat from the Pacific Whale Foundation (www.pacwhale.org) left the harbor of Ma’alaea on Maui. On board a mix of tourists, locals and marine naturalists. There were families with children ranging from preschool age to teenagers, adults of all ages who had joined the tour alone, as couples or in multi-generational groups of locals and visitors to the island. While everyone seemed friendly, as the boat left the harbor, it was clear that groups and families were focused on their experience with each other and largely only spoke to those in their party. We floated gently on the swaying waves NEXT to each other, not WITH each other.

A few minutes into the tour, the captain and the two marine naturalists on board asked everyone to “be on the lookout” for what we all hoped to see: Humpback whales-mysterious leviathans of the sea- that migrate to the Hawaiian islands annually between October and March to have their offspring. We were told that it was still early in the season and we were unlikely to see whale calves yet, but might get a glimpse of male or female adult whales. With the request for help, some passengers pulled out their binoculars, others squinted behind their sunglasses and strained to see any promising movement on the glistening carpet of green-blue before us. Many continued their conversations with their friends and families, trusting that the crew and captain would share any sightings.

The greatest hope of many who embark on these whale watches is to see a whale breach. With that a two-ton marine mammal thrusts itself out of the water nearly completely before plunging back into its mysterious world with a gigantic splash. It is truly one of the most awe-inspiring sights in nature that our family has been lucky enough to have previously witnessed. However, on this particular afternoon the sea stayed calm and the surface remained undisturbed. –The boat with its crew increased its speed to 12 knots. Driven by a sense of urgency and hope, we zigzagged across the waters with the harbor miles behind us in little time. It became quiet on board: This could be a tour where no whale might be sighted. –A very real possibility that everyone on board knew of from the start. The casual chattiness in the groups gave way to silence. In that silence a shift happened: ALL on board started to search the ocean. They pressed themselves along the railings of the boat in a full 36o degree circle and started to share the binoculars they had brought. Children squeezed themselves between the adults to scan the ocean from their version of first row lookouts. First timers to whale watching asked the naturalists how to best know if a movement or shadow under the surface might be a whale. Time ticked by- 5 minutes, 10 minutes, 15 minutes became our eternity. Children started to ask anxiously: “Are there any whales?” and “What if they are sleeping?” A couple of teenagers pulled out their cell phones. 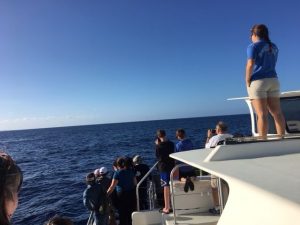 Then 20 yards off the bow of our boat and without ANY warning: A leap! A small, gentle, little splash kind of leap. A dolphin? Within 10 seconds -another one! This one 10 yards off the starboard side of the boat. While the splash was too small for an adult whale breach-this was also not a dolphin. The third leap revealed it to all of us: It was a Humpback whale calf! Excitement and sheer awe spread instantaneously on the boat. A collective gasp and sheer delight gripped all on board. And to our amazement, this little whale calf continued to leap in front of us a dozen more times. It took its baby breaches again and again –sometimes flopping seemingly purposefully back into the water and at other times completely losing its orientation to splash backwards or sideways into the waves in one crumpled baby whale heap. According to the naturalists the calf could not have been more than a month old. The sighting of a baby whale and more so baby whale BREACHING was according to them a truly rare encounter. Suddenly the enormous shadow of the whale mother became visible just under the calf. She stayed just close enough to sometimes “catch” the calf with her back as it plunged back into the sea. At other times she clearly made enough space for it to sink as deep as a one-ton baby would after leaping out of the water. No doubt she was balancing the parental task of supporting and letting go before our eyes. I still remember that for me as educator and as mother, it was that realization that brought tears to my own eyes.

An hour later and after leaving the leaping baby and its mother, the energy on the boat had shifted completely: Strangers were talking to each other, exchanging and marveling together at what they had just seen, children were squealing and wanted to name the baby whale, teenagers had put their phones aside and were beaming (while exploring if anyone had taken a great shot that could be shared and would be social-media worthy). Wonder and awe had connected all of us. NEXT to each other had become WITH each other. Silence had given way to silent marvel for some who seemed to gaze upon the ocean in quiet contentment.

If you are reading this, you may rightfully say: What does this have to do with anything about children or education? Let me share a few thoughts: What brings us parents and educators to our school every day? Is it the promise of getting to be right by our children’s sides, sometimes observing closer, sometimes intentionally stepping aside as they explore their learning with us-as they too leap, breach and explore the edges of their worlds? Is it to witness and trust in the moments when our students surprise us with glimpses of who they already are and what they aspire to-when their physical and mental stamina and grit inspire us to keep honing our craft as educators or parents? Is it to provide an educational experience that allows our children to experience the awe of being completely absorbed and passionate about their learning? Is it to be part of a community that allows all of us to be WITH each other not just NEXT to each other? Is it to leave familiar shores and be courageously curious together while supporting each other? For me, it is all of these things and a strong belief that we all might just experience OUR versions of awe in our community and with each other. But please, still take your children whale watching or experience the marvels of our world near or far if you can!