Have You Seen Bixby’s Lower Yard?

I have always been struck buy the unique characteristics of Lower Yard. I’ve seen schools with engaging climbing structures and creative play spaces but nothing as complete and dynamic as what we have at Bixby School.

At first glance the obvious advantage of Lower Yard is the physical development of our students. Gross motor skills, balance and strength are all supported through the climbing they do. But only when you spend a great deal of time with the students outside, as I do, do you realize how Lower Yard contributes to the development of the whole child.

The climbing structure encourages students to take risks, negotiate turn-taking protocols with classmates and learn how to be responsible decision-makers as they maintain the privilege to be outside without an adult. I see students use mature communication skills when they climb together, helping each other navigate and speaking up when basic safety rules aren’t being followed.

Outside play at Bixby stimulates creative thinking as well. Recently, we experienced over a week of wet weather that, for safety reasons, forced Lower Yard to be ‘Ground Only’. These dreaded words mean students must keep their feet on the ground and are not allowed to climb or use the ropes. Initially first and second graders struggled to find things to do – when climbing is the primary activity in the area it can be challenging to stay entertained when it’s restricted. But when students were forced to re-think how to play in the space their imaginations were ignited.

One group of second graders began collecting leaves from the ground and spreading them out on the wood. This area evolved into a bank, where the leaves became currency. Another group of students joined in to make withdrawals, using the leaves for their own game. The two games connected in a way that served both groups purposes and allowed them to play harmoniously in the same space. 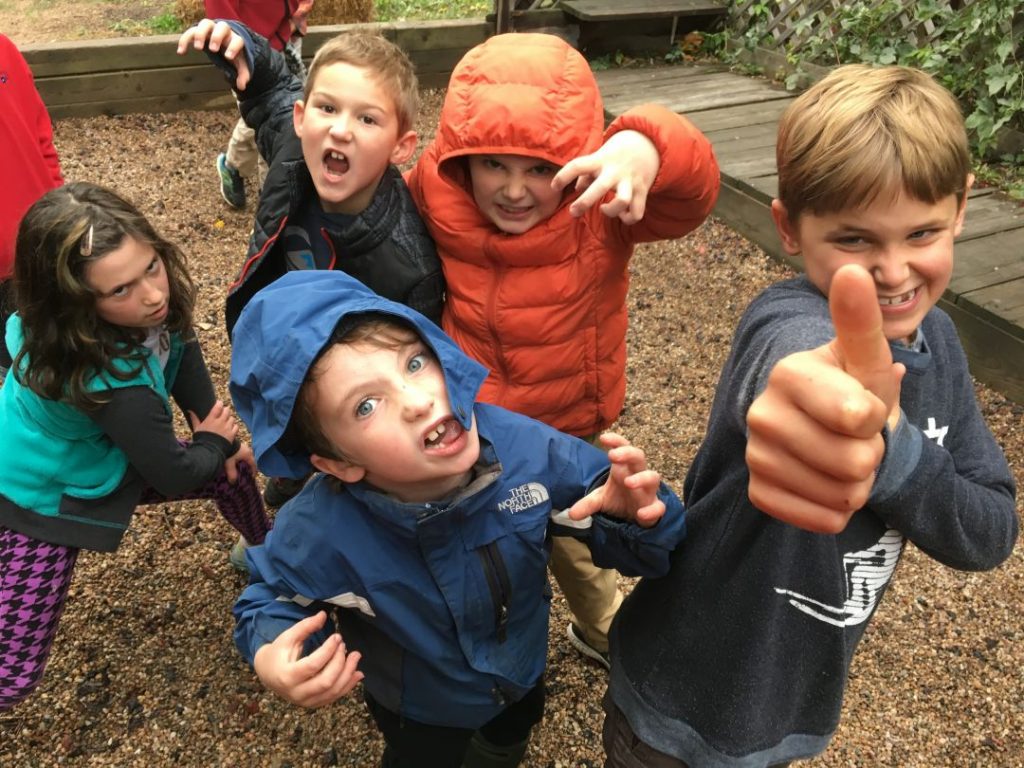 Other students started a zombie game that was attractive to a larger number of children. The challenge for this group was to find a way to play that adhered to the rules that prohibit chasing, and teams that fight against each other. The group of second graders had a discussion and agreed on a way to play that was inclusive of anyone who wanted to join, and put them all on the same team fighting against imaginary enemies. As the students each added their own story lines and characters they helped each other stay out of danger and worked as a group to dodge and evade the zombies. It was fascinating to watch the students use their collective imagination to collaborate on where their game should go. There was a level of cooperation amongst them that is difficult to achieve in other settings.

The layout of Lower Yard provides spaces that encourage creative play. The truck becomes a getaway vehicle; the maze and time towers become houses and hiding spaces. Nooks and crannies that remain empty on a typical day are now perfect spots for collecting leaves and chatting with friends. Additionally, using the space within the parameters of Bixby’s established rules require the children to be creative about the design of their game.

The games these students played continued in different forms over the next few days and eventually the warmer weather allowed us to open up climbing again. But the spark of imagination and the satisfaction they felt from playing cooperatively is evident in the games they have played with each other since that week. And for these students, Lower Yard has transformed into an area where climbing is only one of many possibilities for play.