Bixby School > Blog > Math > So What Are Bixby Tiles?

So What Are Bixby Tiles? 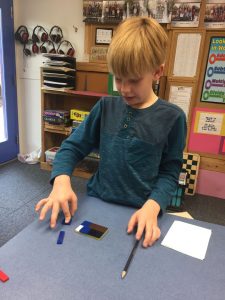 I took a bin of Bixby Tiles home to show my 22 month old and my four year old sons. Having worked with the tiles quite extensively with first and second graders years ago, I had some predictions about what my own children, who are much younger, would do. But in the charm and essence of Bixby math, they showed me making predictions can be somewhat useless when it comes to teaching children. We never know what they will do before they show us.

Zachary, the four year old, immediately saw food. He made himself a “cheese and salami sandwich” with the tiles and took our orders of what we wanted to eat. The simple rectangles of various sizes were not a mathematical manipulative to him, but just another toy to pretend with. After some time, he switched to two-dimensional play, spreading them flat on the ground and creating pictures. Three headed monsters and people holding plates of hamburgers filled the carpet of our living room.

Meanwhile, my younger son, Cameron, found the tiles interesting in a different way. He had quickly picked out all the yellow tiles (the largest of the bunch) and spread them out on the steps. Then he was covering each one with a second layer of smaller tiles. Not completely covered in the way I might encourage first graders to, but he was trying to make some sense of the differences in size. He intuitively guessed (understood?) the next steps that Bixby teachers might take when using these tiles in the classroom.

Most math teachers will agree that manipulatives are an essential part of learning about mathematics. From the beginning stages of Bixby tiles, students learn about spatial awareness, counting, size comparisons. From there, children learn to work with fractions, factors, multiplication and more. These skills can be taught in abstract formats where the students memorize facts and learn to correctly use the algorithms but the understanding is lacking. Math at the elementary level needs to be, above all else, focusing on the foundation of understanding. It does not matter if a child is accurate in their answers if they do not know WHY! And Bixby tiles have a powerful, profound, successful, indestructible way allowing students to dive deeper in their understanding of mathematics.

Allyson is a former Bixby 1st and 2nd grade math and science teacher. She has taken a few years off to be home with her two young sons, and is back part time as a 4th and 5th grade math assistant and math curriculum writer.