In my blog last month about the wonders of free time at Bixby, I alluded to the learning that takes place not only in the successful collaborations (e.g., building the Great Wall of China), but also in the mistakes and conflicts that arise. One aspect of my role at the school is to be available to help students sort out and hopefully resolve those conflicts. I treasure this role because it embodies much of what is at the heart of our mission here—for us (students, teachers, and parents) to get to know ourselves deeply…as learners and as members of a community.

So how can a simple conflict over sharing a swing or particular Lego piece lead to such deep knowledge? It has to do with the complexity of who we all are as people. If one recognizes and values that complexity, and the time it takes to dig deeper, we can see that beneath almost any surface layer of conflict there is a whole range of basic needs we are often trying to meet: the need to belong, to be heard, to be respected, to be valued…and if left unaddressed, we are bound to repeat the same conflicts again and again.

Yes, once in a while a conflict is relatively simple, such as two people wanting that same desirable, little yellow Lego (which the students have recently dubbed as “cheese”), but more often than not, there’s more to the story. 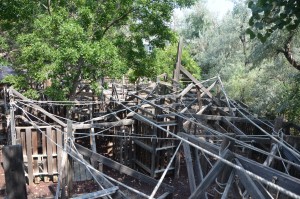 Let’s look at a recent conflict during free time in our Lower Yard play area, which started with the rather typical complaint of “They’re being mean and not letting me play.” On the surface it’s simple—our rule here is that if you are playing with one or more people, you have to let anyone else that wants to join, be a part of the play. I could just remind them all of the inclusion rule and leave it at that (and believe me, that’s tempting many days and occasionally happens—me being human and all). However, if one takes the time and starts by asking students to explain what happened (and really listens), there is usually a hint about a deeper layer. Asking each party involved what they see the problem as, often reveals more—“They won’t let me be what I want.” “Well, you try to change the game whenever you join.” “Well, you don’t give me enough superpowers.” Of the many possible issues here, two important layers come readily to mind: how does one fairly share power, even in a game she started, and how does the one who wants to join show enough trust to do so respectfully? This next question can pave the way to possible answers, “What do you each need to make this work better?”  “I just need you to not change the game if you join.” “Okay, but will you let me choose some things I want?” “I guess so.” These students listened just enough to each other to begin the process of building trust, which opened the door to more cooperation for the next week or so (yup, the exclusion reoccurred–these situations rarely get ‘fixed’, but they do get nudged towards a healthier dynamic bit by bit). Learning how to state our needs clearly, recognizing that sharing even a little power can go a long way—these things take an incredible amount of practice, but it’s so important that it starts somewhere and the earlier the better.

Lisa Van Gemert is an educator, speaker, and advocate for gifted students. During her recent presentation in Boulder, she introduced the idea of “…not stealing our children’s problems.” I was a bit puzzled by her wording until I recognized it as the problem solving process we strive for at Bixby. She introduced the following list of questions to help facilitate this process.

I hope you find these useful; I know I have as I stumble and occasionally succeed along the way of putting them into practice, and practice is what it takes!