Bixby School > Blog > Science > The Science Behind What We See

The Science Behind What We See 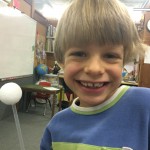 Imagine as a 2nd or 3rd grader trying to piece together the complex movements of the Earth, moon, and sun, to understand ways those movements affect our lives: seasons, moon phases, eclipses, and tides. It’s hard work! Bixby’s young scientists have practiced with models, simulations, and written work, to clarify these abstract concepts. They’ve compared what they see in models to what they observe outside, and it’s great fun to hear them excitedly call out what they notice. For instance, one student watched a simulation of summer and exclaimed, “The sun is so much higher in the sky!” Another wondered aloud, “Can a planet be upside down in space?” 2nd and 3rd graders are making some keen observations and showing some deep thinking. 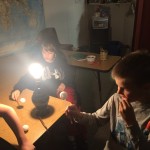 We’ll revisit topics from our moon and seasons unit throughout the school year, to help students retain what they’ve applied themselves to learn. In November, we’ll begin exploring chemistry, which quite a few of students already say is their “favorite!”

In 4th and 5th grades, students continue their study of flight by tackling Newton’s Laws of Motion. They’ve practiced demonstrating the laws with props in the science room. They’ve listened to songs, which now, they say ruefully, are “stuck” in their heads. That’s the idea! Now, to make these academic concepts more real, they’re working to spot examples of Newton’s Laws in their daily lives, especially in the sports they play and activities they enjoy. A 5th grader pointed out that rock climbing is a great example of an equal and opposite reaction, because “you pull down and move your body up.” Another suggested a hockey puck shows us how an object in motion stays in motion, while a 4th grader analyzed a karate chop’s force, mass, and acceleration. One class picked apart what happens when a drumstick hits a drum. Through these discussions, Bixby scientists are showing their understanding of Newton’s Laws and that they’re a very active, involved bunch!

Soon, to conclude our unit on flight, students will build and fly paper airplanes, relying on what they’ve learned about forces and motion. They’ll answer questions about their designs. This culminating project allows students to show what they’ve learned and to address areas where they may have lingering confusion. In November, they’ll begin their next undertaking in science: exploring human body’s systems.