Bixby School > Blog > History > The Tricky Month of May

The Tricky Month of May

I could make a case for how each month of the school year has its own particular and considerable challenges, but right now May and the approaching end of the school year are staring me in the face and I am a jumble of emotions. Among them is excitement for the annual release and the opportunity to utterly change the pace of living to whatever extent one can afford to do that. I have always considered this to be one of the more amazing benefits of being a teacher and I’m hugely grateful for it.

But there is way more to May than excitement—there is also a reckoning. The facing of my many beginning of the school year good intentions, spoken and unspoken… “I’ll do a better job on portfolios this time” and “We’ll make it to the New World in 4th/5th grade history class by the end this year.” Well, my portfolios left much to be desired and our history class is still mired down with the plague (there is a small hint of realism in that I think).

Even after many years of teaching, I have the humble honor of wrestling with many end of the year doubts… “Did my students truly grow as learners?” “Did I grow as a learner?” “Was it worth spending over a month of history class on the knight William Marshal?” “And by the way, just how did I end up spending over a month on him?”

At least I can start by trying to answer that last question. This was my first year teaching history, and when we began discussing and illustrating our timeline of the Middle Ages, well over half of the drawings were of knights. So this was clearly a topic worth focusing on more deeply, but how to bring it to life? That’s when I stumbled upon the fascinating story of the 12th century knight, William Marshal, and things took off from there. 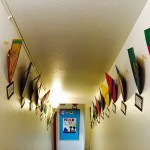 We learned how King Stephen demanded loyalty from the lesser noble, John Marshal, and sought to secure that loyalty by holding one of his sons as hostage—John Marshal sent him his five year old son, William. Twice the king threatened to put William to death and twice his father basically said, ‘Go ahead, …I can make more and finer than he.’ Through William’s childlike innocence, he softened King Stephen’s heart, and each time death was postponed. From there, William Marshal went on to not only live, but to become what many historians believe to be the greatest knight in history, defeating nearly 500 foes in melee tournaments and actively fighting for his king at 70 years old! (He had served five different kings over the course of his life.) This unit culminated in the classic project of making cardboard shields, embellished with symbols and colors of each student’s choosing. 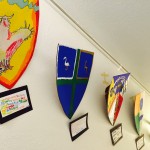 But back to my doubts and the plague, which were both raging by the second week of May…this also happened to be when I had an experience that helped temper some of those doubts (but did nothing for the plague). I noticed a student struggling to get started one Monday morning, unable to even be ready enough to enter his first class. I invited him to take a moment for some conversation with me, and while he could not point to a particular incident, he stated in a voice weighted with doubts of his own, “It seems like no one cares for me.” I certainly can identify with such a global feeling and the accompanying reluctance to have any amount of logical reassurance move me from it. He was unconsciously squeezing his applesauce snacks in his fists as we began to chat and he was open to the suggestion of eating one (low blood sugar is brutal on our perception of the world)…and then the conversation turned to his shield. He said, “I wonder why no one else chose the thistle?” “I’m not sure, remind me about what it symbolizes.” “Pain and suffering…why would a knight choose to put that on their shield, it’s not powerful like the others?” I didn’t think of asking him why he chose the thistle; this child and his family had suffered a tremendous loss over a year ago…perhaps I was trying a little too hard to teach and said, “Well, some people would say that you need to experience everything in order to find all your courage and strength, including pain and suffering.” “Yeah, like William Marshal, he almost died two times.” “Yes, and some people saw King Stephen’s compassion in sparing him as a weakness, while others saw it as a strength—it’s complicated.” He continued, “And William Marshal suffered a lot. He got to be so successful because he could handle a lot of pain.” “That’s right, remember when he won a tournament and nobody could find him at the end until they heard the blacksmith’s hammer pounding away?” “Yup, his helmet was stuck on his head from being squashed by so many hits in the battle and the blacksmith was trying to make it round again!” “And that was what winning looked like!?”

As so often happens when we are able to share something of the shadowy blues we carry around, that global feeling of ‘ no one seems to care’ dilutes, and just by connecting with someone, our energy is shifted and we are ready to keep trying. Also, at this point in our visit, the applesauce snack had taken hold and his mood had shifted to the point of being able to face his class with some spirit. I can’t be entirely certain of exactly how those bits of story added up for him, but it was a somewhat rare revealing of just how powerful stories can be and a glimpse into those deeper resonances. The conversation had done a lot for my spirit too…so while there are plenty of doubts still lingering (and that’s a growth thing), I probably will spend that time on William Marshal again.

Now it’s time to put that plague to rest—after all, Leonardo Da Vinci and the Renaissance are just around the corner!