To Bridgewalk Pond We Go! 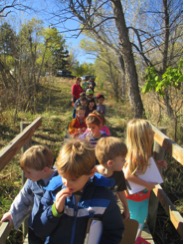 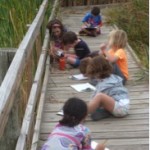 I believe children cultivate critical thinking skills when they observe closely and record what they see. Every Monday, the kindergarteners walk to a local wetland area called Bridgewalk Pond. They carry a clipboard, a pencil, and a magnifying glass to record their observations. With the changing of the season, the kindergarteners notice many differences at the pond. At the beginning of the year, the algae covered pond was full of frogs. Now, the algae and frogs have disappeared, but a family of ducks has moved in.

Where did the frogs go? The kindergarteners wonder if the ducks ate all the algae off the pond? The only few frogs we have noticed, are the ones in the ducks’ mouths. We have learned that ducks are omnivores, so they eat both plants and animals. We have also noticed that the cattail heads are opening and the wind is spreading their tiny seeds.

We are looking closely at what animals need to survive and why certain animals live in their particular habitat. And as winter approaches, the kindergarteners will begin an inquiry into animal adaptation.