Wow! So Play Really is Work! 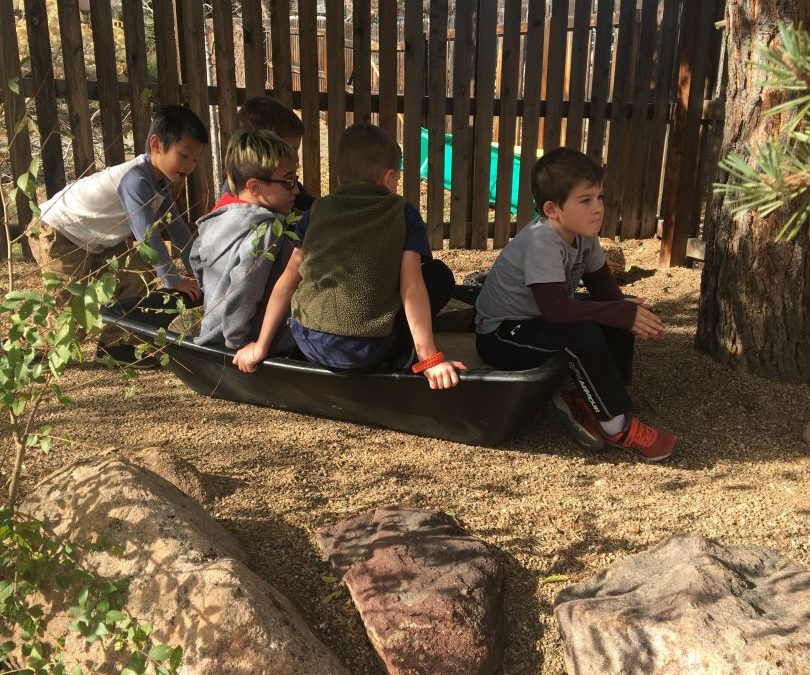 It all started out simply enough, two first graders decided to pick up a 3 x 7 foot heavy- duty plastic tub and move it to another location in the playground. That was fun enough for short time, then it occurred to them that this tub would be good for carrying stuff too, so they loaded up a couple of logs. But that proved too heavy for the two of them, so the call went out, “We need some help over here!”

Two more first graders showed up and the tub was once again on the move, which happened to be in the direction of more logs, “Let’s load more logs, and these chairs too!” You can see where this is going… “We need more help!”

Yup, two more first graders joined in. Only now the load was heavy enough that they had to coordinate the pick-up, so some leadership emerged and this order was barked out, “Pick it up when I count to three!” This tub, weighing in the neighborhood of one hundred pounds, was in motion again, at least until the next order was given, “Okay, rest!”

After five more minutes or so of moving around the yard, they were ready for bigger challenges. At first they tried having one of the team members (for they were indeed a team now) seated on a chair inside the tub, but with only five lifters left, and considerably more weight, they could only move the whole show a few inches before losing their grip or needing a rest—entertaining for the person in the tub, but not particularly satisfying for the carriers.

Then a new leading voice suggested, “Let’s take it up to the deck!” “Yeah, to the deck!” the group echoed, and so they started to clamber up over rocks a little at a time with frequent rests (introducing an incline with obstacles had definitely upped the challenge). A cheer went up when they reached the deck, but they didn’t sit on their accomplishment long (approximately 45 seconds) before the order was given to descend, which brought its own sort of risk, “Go slower, go slower!” (Just in case you were starting to wonder about all these exclamation marks, each new leader was pretty sure that to truly lead the crew you needed to shout your orders.) 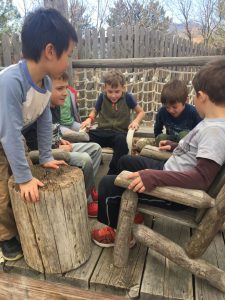 They crossed the entire yard once again and ended up next to a small raised deck area near the footbridge. The whole enterprise had taken about 25 or 30 minutes of sustained effort, and with only minimal discussion, these six young workers agreed it was time to use what they had been carrying. They set-up a nice semi-circle of seats on the deck and enjoyed the fruits of their labor in what appeared to me to be a ‘break room’ of sorts.

During this extended period of play, these students worked on a remarkable number of physical and social/emotional goals that we as teachers so often strive to engage them in. There’s no doubt about the workout they had, as there was never an argument about whether to rest or not each time that order was given. As for the necessity of teamwork that we adults so rightly praise and highly value—that was intrinsically built into this endeavor from beginning to end. Two of the six team members tend to be quieter and generally content to play alone for periods of time, but they found their clear and necessary roles compelling enough to stick with all the shouted orders, jostling, and heavy lifting. The other four much more gregarious teammates traded turns in leading the group, not by organizing who starts out or who goes next, but by the merit of their ideas. (Yeah, we want more of a challenge! Yeah, we want to rest! Yeah, we’re all ready to lift again!)

And then there’s this character quality with many names—grit/stamina/persistence that this team so naturally embodied during their play. These qualities have always been valued, but perhaps have become more elusive in recent years, which has begged the question on many educational fronts, ‘Can we directly teach character?’

I know there are many opinions about the answer to this question, but there is no doubt in my mind that one of the most powerful ways to foster such character qualities is to give people, adults and children alike, at least some degree of freedom to invent their work and their play. And no matter which one you start with, one will inspire the other, as they are each beautifully, inextricably woven together.